What are LED Parking Lot Lights?


What are the Different Types of LED Street Light Distribution? 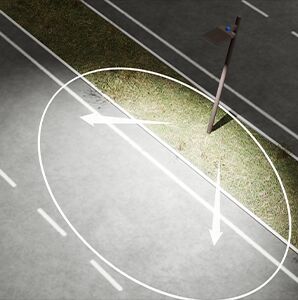 With a recommended lateral width of 15 degrees in the cone of maximal luminosity, Type I is a two-way lateral lighting distribution ideal for illuminating walkways, footpaths, and sidewalks. Type I lighting is usually installed next to paths, providing ample illumination for narrow thoroughfares.

The preferred lateral width of Type II light distributions is 25 degrees. Type II of lighting is often used for luminaires installed on or near the side of comparatively narrow roadways with a street width less than 1.75 times the intended mounting height. For example, a 4m (13ft) mounting pole for street widths less than 7m (23ft). Type II lighting distribution systems are used to light wide sidewalks, ramps, entrance lanes, and other long, narrow lighting regions, allowing for the illumination of large, open expanses.

The recommended lateral width of Type III light distribution systems is 40 degrees. This style of distribution is designed for luminaires that are installed on or close to the side of medium-wide roadways or locations where the roadway or site width does not exceed 2.75 times the mounting height. For example, a 4m (13ft) mounting pole for street widths less than 11m (36ft). Type III distribution systems, which are used to light streets, parking lots, and other locations, need a larger lighting area.

The recommended lateral width of Type IV light distribution systems is 60 degrees. This distribution system is commonly used for mountings on the side of wide roads, so long as the width does not exceed 3.7 times the mounting height. For example, a 4m (13ft) mounting pole with street widths less than 14.8m (48.5ft). A rounded arc of light is produced by the Type IV distribution, which is usually placed on the sides of buildings and walls. It's ideal for illuminating the perimeters of parking garages and businesses.

Type V light distribution systems emit a 360-degree pattern that is equally bright from all angles. No matter where you look, this distribution system has a circular symmetry of luminosity and stays reasonably consistent. It's especially well-suited to luminaire placement in or near the center of highways, a parkway’s center islands, and four-way stops. 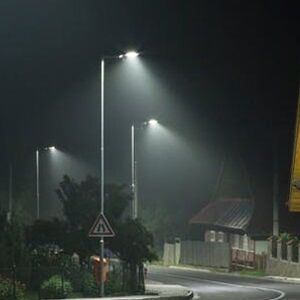 How to Choose the Right Light Distribution Type for Street Lights 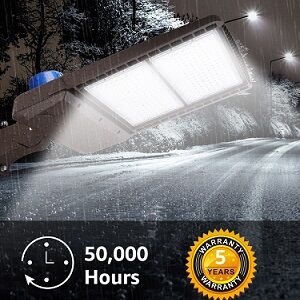 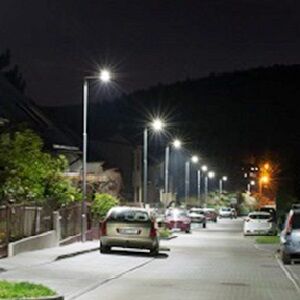 How to Choose Parking Lot Lights for a Driveway

The output brightness of the 300W LED parking lot lights is 39,000 lumens, which provides extremely high lighting brightness and visibility so that you can see the road signs clearly at night.

Compared with other lamps, LED lamps are durable, and there will be no stroboscopic phenomenon, which protects human eyes. In addition, the protection level of LED shoebox lights is usually IP65, which means they are completely suitable for outdoor use and can adapt to bad weather like rain and snow.

Step 1. Loosen adapter plate and rubber gasket.
Step 2. Fix to the square or round pole bracket with bolt.
Step 3. Connect the power wire to the pole wire.
Step 4. Tight with bolt.
If you want to get detailed tutorial on how to install LED parking lot lights, please check here.

How Do Lepro LED Street Light Save $Thousands